As the dream began I was standing about 100 feet above the ground at the very top of a fire tower. I could see in all directions. I could clearly see random fires all around me on the ground below. There were no buildings, no homes, no businesses, it was just forests and fields and lots of green cover below, no mountains, no valleys just flat ground and a lot of people out there.

The fire were being driven by very strong winds that I could feel on the top of that tower. As I looked down, I began to yell as loud as I could at people who were just wandering below and some were walking directly towards those dangerous fire areas.

As they were walking towards the areas where I saw the fires, I tried to warn them but I had no bull horn, no microphone, no sound system and I could tell that my voice was strained from yelling. I was telling people to walk in a direction away from the fires and was saying “north” and “south” or “east” or “go west”. I was yelling at the top of my voice, “hey! Go to your left! Go to your left! Hey, you in the blue baseball cap. Hey, you in the yellow jacket, go left, there’s fire ahead!”.

Even though I gave them clear directions, nobody was listening. I kept screaming – and I was screaming – very, very loud, I could feel the raspiness in my voice from all the screaming. I started clapping my hands trying to get their attention. I even had a piece of wood I was beating on the metal frame in front of me where I stood as I looked down below, doing anything I could to get the attention of those on the floor of the canopy below me. But nonetheless, nobody was listening.

Suddenly what appeared to be a group of soldiers came out of the forest. They were armed with weapons and were all wearing green camo, like the kind of camouflage you go hunting in. It reminded me of the 70s and 80s the early style of camouflage that looked kind of cheap, kind of cheesy, it wasn’t professional, it wasn’t military grade by any means.

These soldiers started telling the people to ignore my yelling as there were no fires in the area at all. I could tell they were not truly soldiers but could not tell whom they were affiliated with. They had military equipment and obviously had background in it.

The people continued walking towards the fire as if they were blind but one young teenager began wiping his arms, kind of like oh he could feel the heat coming. He said he was getting hot and that maybe they should listen to the guy in the tower. One large adult came to the teen and pushed him very hard so the kid sprawled out on the ground. He told the teen “Shut up or you’re not coming with us” and the teen watched the crowd go but he did not get up off the ground. Within seconds the people in the crowd that were walking towards the fire burst into flames and they were screaming in agony and pain and they were running back towards the young man. They were begging him to put the fire out, but he ran from them in the opposite direction and didn’t even try to help them.

Seeing the young man run away, I began telling him to head to his left for about 50 feet and to wait for a fire break. Soldiers began yelling for that kid to head back the way he’d come but he refused and he kept running, ducking every few feet as they were firing at him. After he got away the soldiers began circling the fire tower and they grabbed large sticks and they set the ends on fire, like torches, but the tower was made of steel and it would not burn.

One of the soldiers whistled very loudly and I heard large trucks coming through the canopy. There were two 18-wheelers coming slowly up to the two corners of the tower. They had open trailers that were full of metal and gasoline [and] you could smell the gas coming off it. There were just pieces of metal in a pool of gasoline like in the back of a semi trailer
with the top cut off.

At this moment I prayed and asked God for help and I looked out across the sky, it was then that I saw not hundreds but thousands of the tops of other fire towers all around me and there were people, men and women in those towers and they were all yelling at people below them about being safe and avoiding the fire. But they were also dealing with the trucks that were coming towards their towers.

Each truck backed up a little bit trying to build up speed to hit the towers. So all of a sudden we hear this truck start revving up, they’re revving their engines and I see a soldier who held a lit flare ready to throw it. Just then he threw it in the back of the trailer and there was a thunderous explosion. This happened all around me and also to the literally thousands of fire towers the I had seen.

At that moment all of us on the towers, the men the women, myself raised our arms and we made a fists. We put our hands straight up in the air and we yelled as loud as we could

Luke 19:13 “And he called his ten servants, and delivered them ten pounds, and said unto them, Occupy till I come.”

Just then all those trucks begin revving their engines. They’re on fire in the back from the explosion. Each of us in the towers went back to yelling at people as those trucks are revving their engines. We all continue yelling at people to watch what’s going on. The soldiers shouted back and were telling the people “there’s no fire they’re lying”. The soldiers shouted at us and said “Now we bring the fire to you”. There were explosions all over the area as they moved those trucks towards us as quickly as they could.

As we saw the trucks building up speed and heading directly toward the towers, all of us put our arms around the metal in front of us and we just held on to brace ourselves for the impending impact but at the same time we kept yelling while we held onto the tower. We kept yelling at people below us to not run towards the fire, to go left, to go right, go north, to go south.

When the trucks hit all our towers there was a sonic boom and the towers shook as the earth seemed to move but they did not go down. The trucks backed up as we continued to yell at the people in our area of influence. And then they came speeding forward again to hit the feet of the tower. This time the towers moved more than before and the ground around it caught fire as well as the trailers tipped over and they wedged the trucks against the tower feet. All those in the towers kept yelling down at people and now we’re yelling at the drivers of the trucks who were trapped, telling them to get out the fire was spreading around them.

Several of the trucks exploded. One exploded at my feet and it killed the driver instantly. In another truck one of the drivers was trying to get out and I kept yelling “Go to the right, go to your right, go jump off the truck, jump off the truck and go right”. He looked back and he said “I’m sorry I’m sorry I’m sorry”. Most people still did not listen to us about where they were running and they ran into the fire as well so they ended up getting killed.

Those of us in the tower continued to agonize and warn some of those that were bursting into flames. Then they hit, it seemed like an invisible wall of fire they could not see but we could. Some did get very warm and turned back, some felt the heat but they seemed confused and they kept going forward until they too burst into flames.

A few thanked those of us up on the tower with tears in their eyes and they ran to safety. Those in the towers kept warning others and screaming. Some of us were hoarse from yelling so loud and some were so weary and tired that we simply whispered, because that was all that we could do from all the yelling we were doing to try to get people to realize how dangerous it was.

And then suddenly the noise, the fire, the flames, the explosions all the yelling it just stopped, everything got brutally silent. And the clouds got very white right in front of our eyes and it got very, very transparent and everything lit up like lightning and flash and did not go out. I then heard the voice of the man that I see so often in dreams and he spoke out of that cloud and he said this:

And in that instant that light disappeared and the darkness returned and I saw the fire on the canopy below me, I saw that all the other people in the tower started yelling again at those below even while the towers on which they stood were being attacked and moving. So we just kept doing what we were doing and we warned the church with even greater intensity. 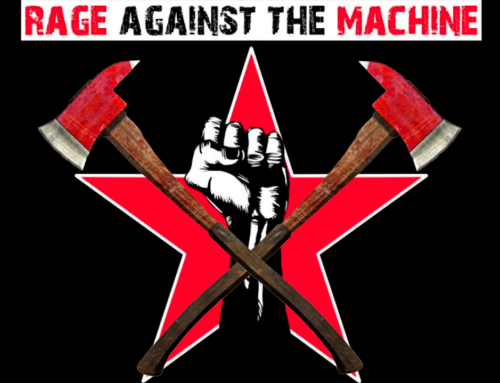